Day 2 & 3 of our trip round Europe was spent in Cologne, Germany. We arrived early evening from Brussels so had time to eat and have a few drinks before just one whole day of sightseeing the next day.

Where to stay in Cologne

We stayed in the Pathpoint Cologne Backpacker Hostel and we were really impressed with the facilities after the previous night in Brussels. Firstly, the Hostel was really close to the station, so walking from the train with our backpacks was relatively pain free!

The Hostel had wifi in the main lounge area, which was useful for finding out where to go and how to get around, plus the Hostel provided maps which were great for spotting places to go.

For me, the best feature of the Hostel was the kitchen. They had an open plan kitchen with 4 worktops, hobs and ovens, great for travellers on a budget! We made dinner at the Hostel that night instead of going out for food, saving our money for the rest of our trip. 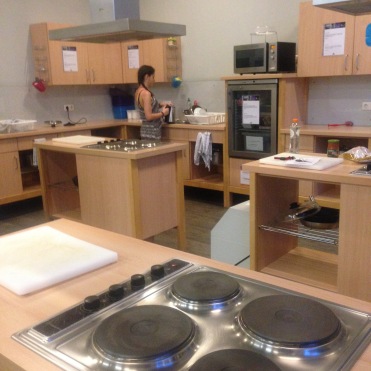 Out of all the hostels we stayed in this was the biggest room we shared with 8 of us in one room. We did only have one toilet and one shower between us in this room but we didn’t have any issues with this at all. There were lots of other communal bathrooms throughout the Hostel that could be used as well.

Things to do in Cologne

On the first night we took it easy, had some dinner and asked the Hostel staff where we could get a drink; they pointed us in the right direction and we found a cute cocktail bar where we could sit outside and plan what we wanted to do the next day.

The whole of the second day was spent sightseeing and we didn’t have time to waste as we were catching a train to Berlin later that night. The first stop in the morning was Cologne Cathedral which was so grand! 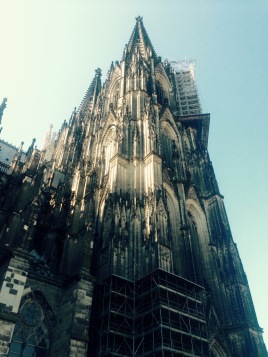 We then walked past the cathedral and followed the road up to Lovelock Bridge and took a walk across the bridge to reach the Cologne Triangle which provided an amazing view over Cologne (as you can see the route was very well planned out in advance so we could make the most of our 12 hours here!). 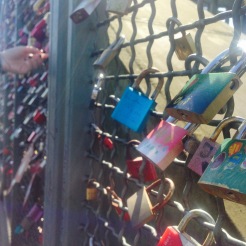 The views from the Cologne Triangle were insane. The only downside to such a tourist-y kind of place is the queues, and when you’re waiting to climb such a tall building with a limited number of people being allowed up there at one time… quite stressful! 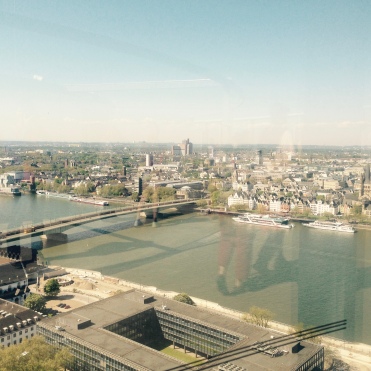 Following this we took a walk alongside the river down to the Chocolate Museum, which was really interesting! The whole process of creating the chocolate and packaging it was explained and shown to us, and they even had chocolate making classes and custom made chocolate eggs. It had tons of branded stuff in there for example models of the Lindt Bunnies, the Kit Kat bench, the Toblerone machine etc.

They even had a section on the marketing and packaging of chocolate bars over the years and this was really up my street with my passion for marketing!

In the afternoon we took a while exploring the city by foot and just walking around a bit really. We stopped for lunch in a big square and tried our first Currywurst… when in Germany!

My overall time in Cologne was good, but short. Honestly, I don’t know if I would go back again. We had one day to do as much as we could and I felt like we exhausted most of what Cologne had to offer. Do you think I’ve missed something off? Let me know of your travels to Cologne in the comments!